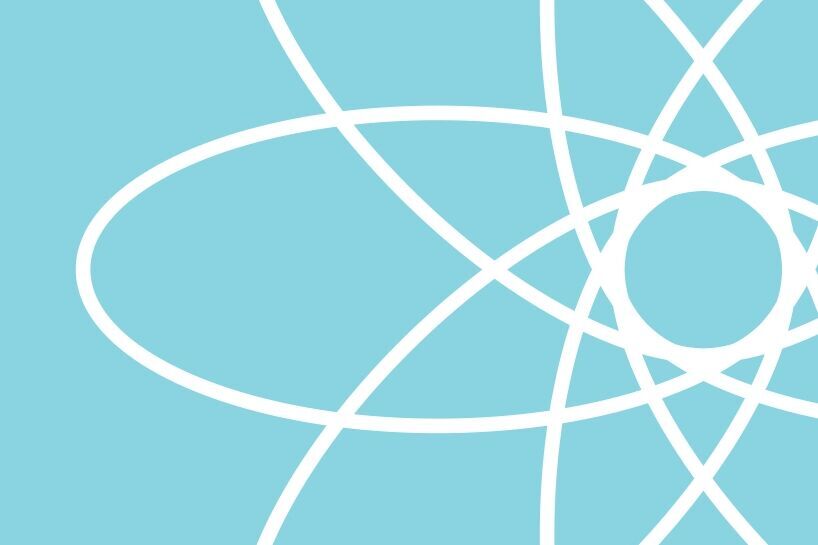 Part of the Syngenta Flowers group since 2018, Norfolk-based Floranova is a leading international breeder of F1 hybrid and open pollinated annual and perennial ornamentals, including petunia, geranium, begonia, ornamental brassicas, pansy and viola, primula and patio vegetables, as well as many others, including a range of perennials.

The majority of breeding takes place at the company’s headquarters near Dereham in Norfolk, but the company also has a joint-venture in India for the production of warm-climate crops. In Norfolk 4,000m2 of heated and unheated glass and polytunnels are used to grow a wide range of species, and the requirements of producing plants for breeding creates some unique crop protection challenges.

“I think there are higher pressures on the plants as they are on site for a longer period of time; it’s not just a case of getting them to flower and then getting them out of the door” explains Product Development Manager Peter Bradford.

"Sometimes we are holding plants for nine months from sowing to harvest, so the plants are getting tired and trying to shut down, while we’re doing our best to keep them alive. As they become a bit more mature their defences drop slightly and they are more vulnerable to pests and diseases.

In our climate we can’t use biological control for work twelve-months of the year, because of lower winter temperatures, but generally from February-March through to September-October we are almost exclusively using Koppert biological control products, with the exception of some biopesticides as part of our IPM programme, or if we have a very severe issue we need to get on top of.” 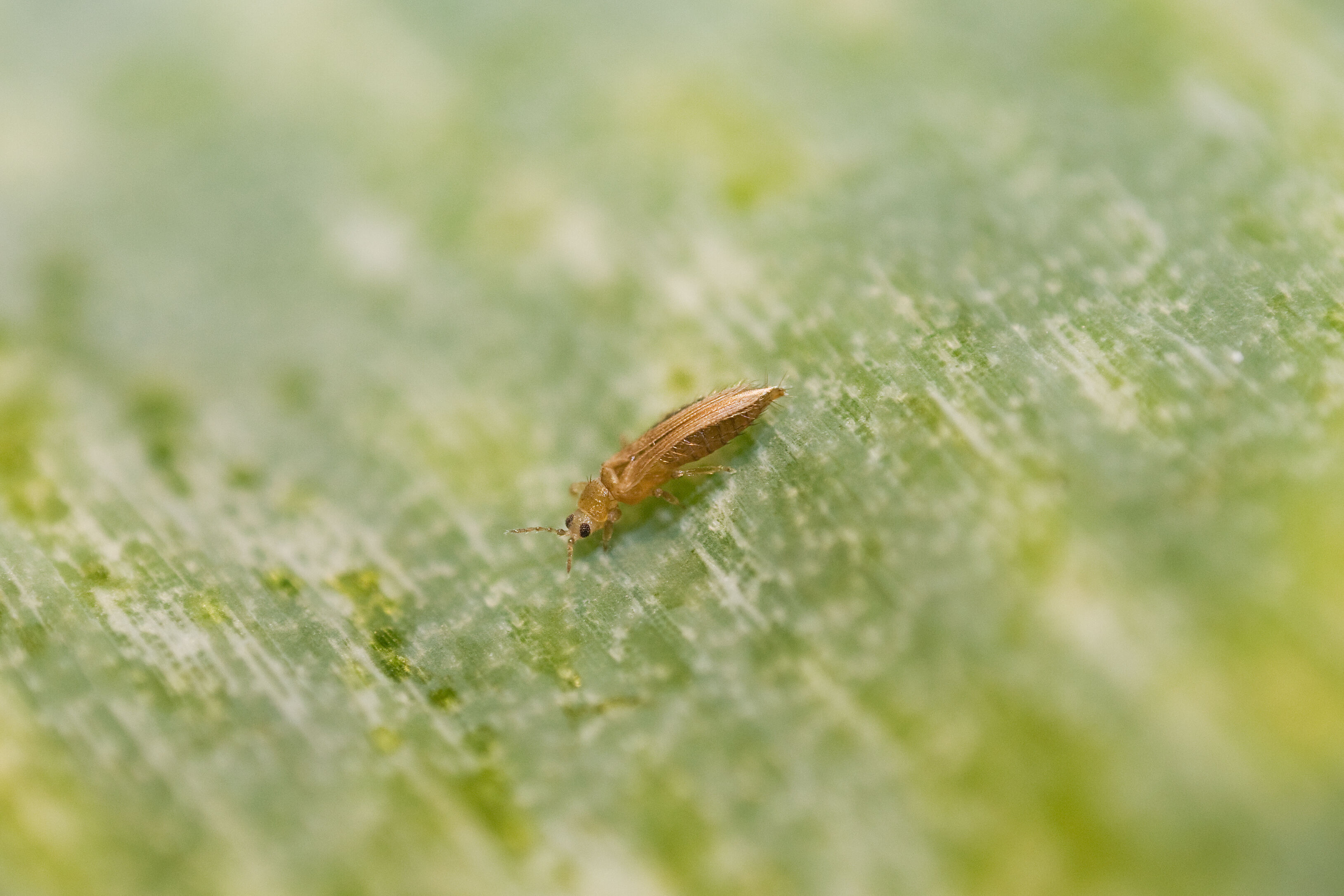 Thrips are a prominent pest for Peter

The biggest pest issue for Floranova is thrips, along with sciarid flies and, increasingly, aphids. Fortunately, the company does not really have problems with whitefly or vine weevil, but since the loss of thiacloprid insecticide treatments to the compost, aphid control is expected to become a greater requirement going forward, and spider mite can make an appearance in the summer.

“Generally, as part of our annual IPM programme we start with Macro-Mite (Macrocheles robustulus) during propagation for sciarid fly control,” explains Peter. “Then through the season we use Swirski-Mite (Amblyseius swirskii) in combination with Thripex (Neoseiulus cucumeris) to control thrips, with additional use of Thripor-L (Orius laevigatus) when we have more adults present.” Experience has shown that Orius laevigatus survives better on some plants and others and this knowledge helps to inform which products are used where on the site.

"We are also using Aphiscout (a mixture of different parasitic wasp species) more this year than previously to get on top of aphid numbers,” he continues. “For spider mite control in the summer we use Spidex Vital (Phytoseiulus persimilis) and Spical (Neoseiulus californicus).” 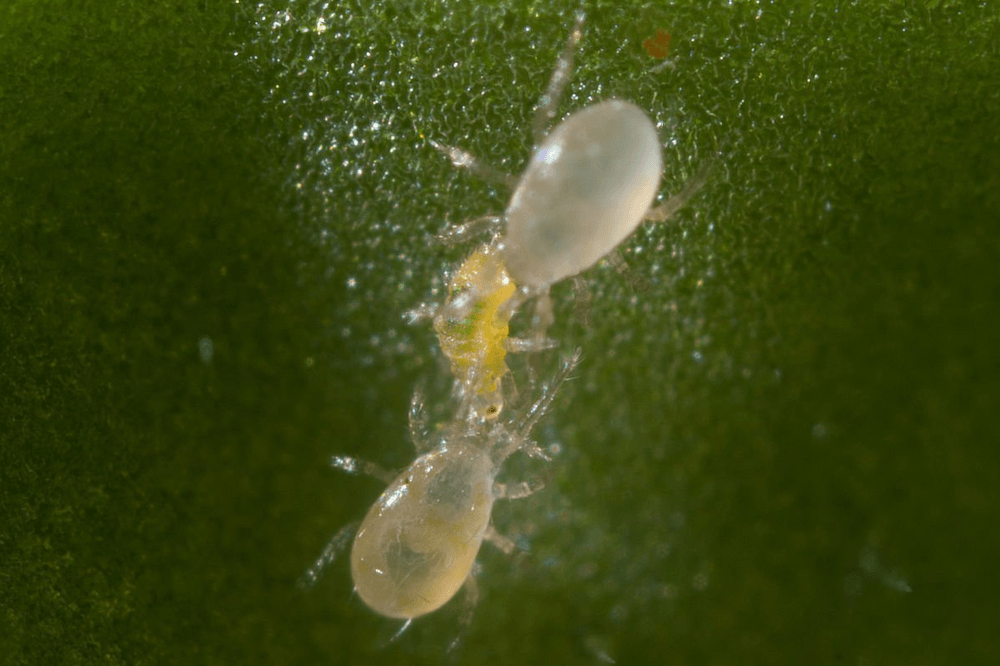 Amblyseius swirskii helps Peter in his fight against thrips

The production of patio vegetables, such as smaller sized tomato, pepper, chilli and aubergine plants has also expanded over the last ten years, and these can create their own particular pest control issues.

“Some species are particularly susceptible to certain pests,” comments Peter. “For example, peppers and aubergines are magnets for thrips. The biological controls work well on them, but it is very important to get them applied early on so they can establish. If you end up firefighting, it is too late.”

As well as macro-biological controls, the company also uses Koppert traps for both monitoring and controlling a range of pest species. “We use yellow and blue Horiver sticky traps and when we have individual plants being pollinated in large containers, we actually cut the traps into four and use a piece of trap in every-one as physically catching the pests can be one of the best ways to get rid of the problem,” says Peter. “We also use the traps earlier in the season to monitor pest populations, and if we get high pressure areas, we use them in conjunction with Koppert’s Lurem-TR kairomone which draws thrips out of the crop and increases trap catches.” 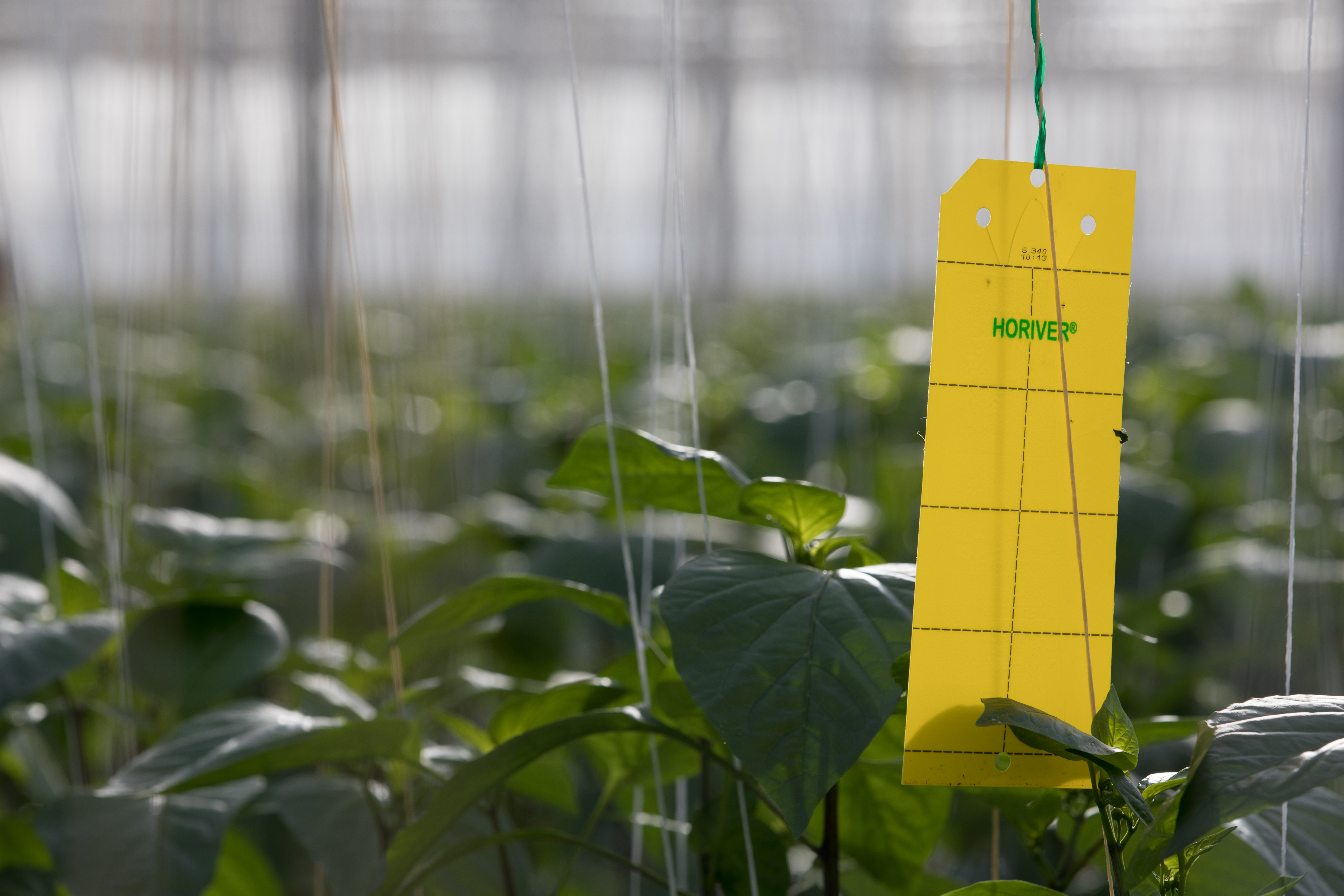 The production of clean plants involves the use of fungicides, and while most have few negative effects on the beneficial insects, Peter also makes use of Koppert’s side effects app which shows the potential effects and persistency of chemical sprays.

“That’s useful to us as if we have a disease outbreak in a particular area it gives us the opportunity to see which chemicals will do the least amount of harm,” he explains. “We have also used Koppert biostimulants for the last six years. In particular regular use of Vidi Parva, Vidi Terrum and Vidi Fol (Fortafol) early in the plant’s life and over the summer help to boost the plant’s resistance.” At the end of the season with the arrival of winter, a clean-up insecticide spray programme is employed so that the cycle can start again the following year with clean, seed-raised plants and no carryover of pests of diseases. 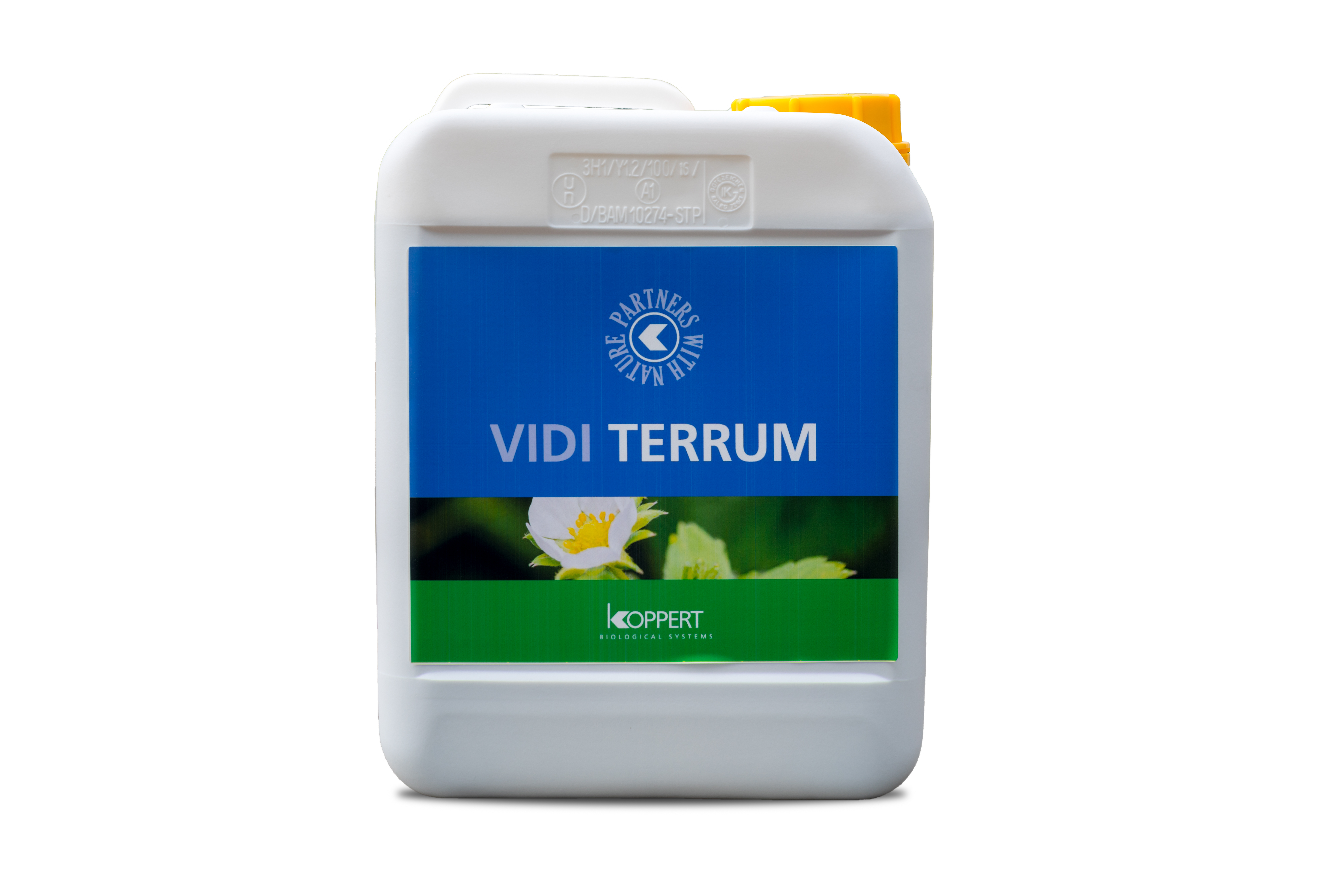 Floranova doesn’t just employ Koppert’s products for pest control and plant health, as the company is increasingly using bumblebees and flies for pollination.

“In the past we have relied on hand pollination,” explains Peter. “For certain crops which are difficult to pollinate by hand we have found bees to be much more successful, and for some of the open pollinated crops having flies crawling over a dense population is very effective.” Because Floranova is only usually pollinating a few plants in a small area, it uses Koppert’s smallest size of Natupol hive (Natupol Seeds), sometimes even putting different species in the same pollination cage where there is no danger of cross pollination. “It’s worked really well,” he adds. 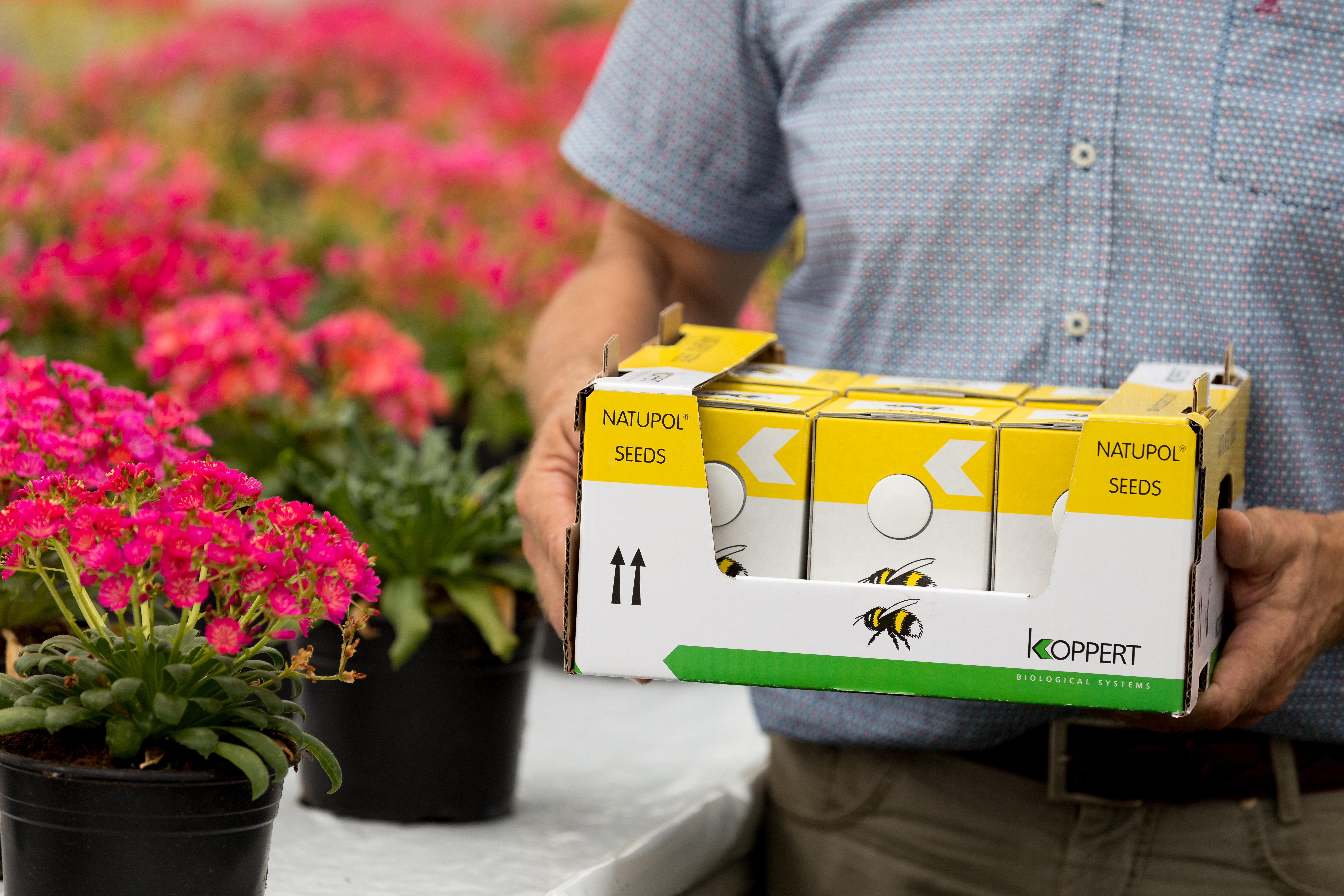 Looking to the future, Peter hopes to make subtle improvements to the IPM programme rather than wholesale changes.

“We’ve always tried to assign someone to biological control,” he explains. “At the start of the year we employed someone who’s very interested in the subject and she’s already met with Dr Richard Binks of Koppert. We are trying to focus a lot more on what we are doing and calculate our requirements in more detail than we have before with more monitoring.”