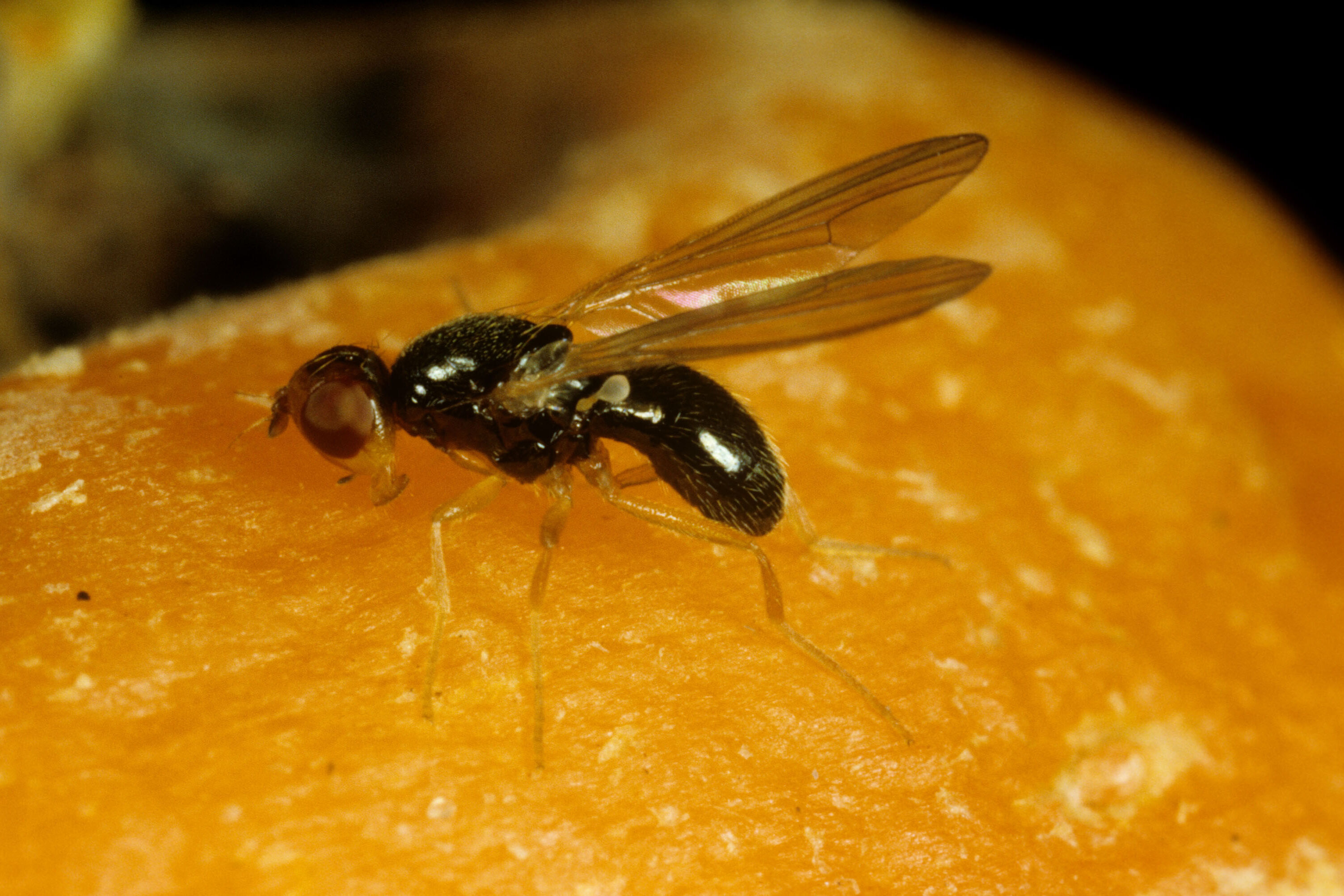 The Carrot fly, Psila rosae, emerges from overwintering pupae, to lay white, ovoid eggs, in cracks in the soil surface, close to the plant’s stem base. After a few days, the eggs hatch into colourless larvae which feed on fibrous side roots of young plants, but can also feed externally on young tap roots. The second instar larvae can feed externally and internally on young tap roots, but the majority of mining activity inside taproots is attributed to the creamy white third instar larvae. The adult fly is 6-8 mm long, has two pairs of wings, a reddish-brown head, a shiny black thorax and a dark abdomen. 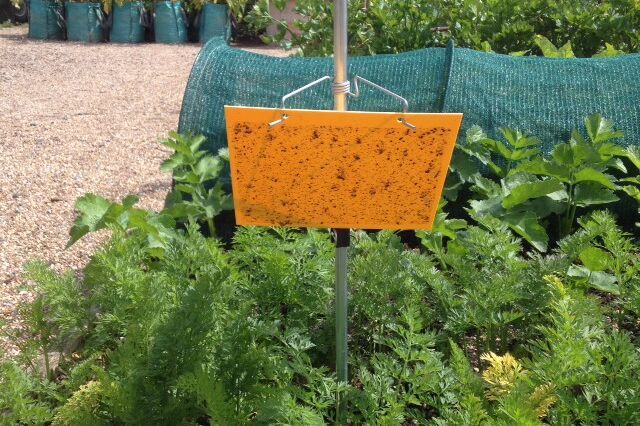 The flies are attracted to Koppert’s orange-coloured Carrot Fly Traps, which should be placed just above canopy height, at a 45o angle, facing downwards towards the soil surface. Carrot Fly Traps are supplied complete with supporting clips and poles. A minimum of 4/ha is suggested, but up to 10/ha may be more appropriate in some situations. Traps should be positioned in the field from April, and again in June, to monitor for the emergence of the first and second adult fly generations. 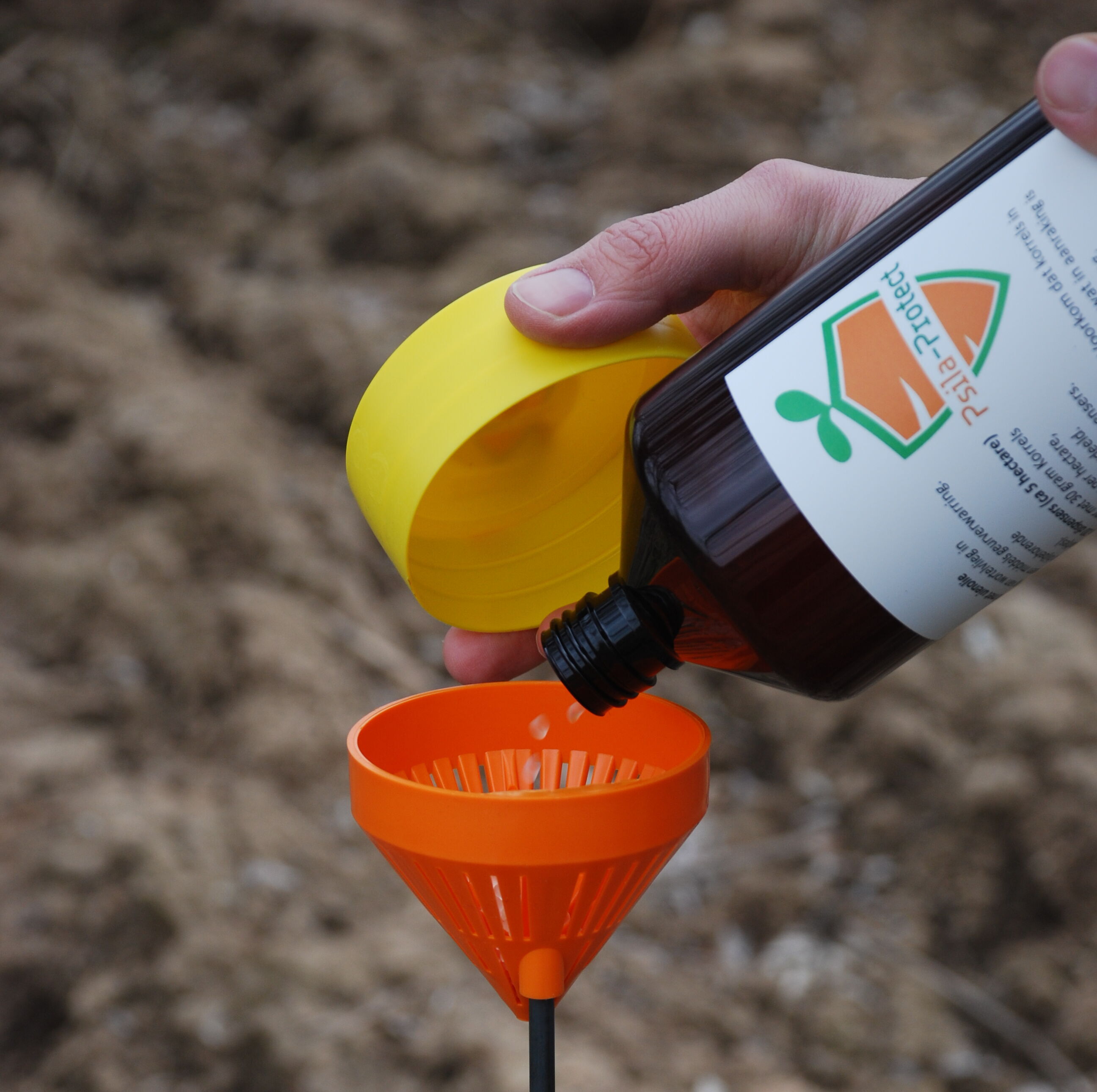 Psila Protect is a new product which is designed to deter adult carrot flies in carrot, parsnip, celery and parsley crops. The product consists of an onion oil formulation placed inside slow-release capsules. Only one introduction per season is required, which is made in the spring before Carrot flies emerge from overwintering pupae. Capsules (30g by weight, or 50ml by volume) are added to a plastic cone-shaped dispenser with a lid. Each dispenser is positioned in the field on a supporting pole. The standard dispenser introduction rate is 4/ha, but this can be increased to 8/ha in high-risk situations.

There are three treatment windows for Capirel:

Capirel contains an infective juvenile stage of the parasitic nematode Steinernema feltiae. Once a nematode enters a Carrot fly larva or pupa, it releases a toxic bacterium, which causes septicaemia and death. The summer treatment, against second generation larvae, is pivotal in the management of this pest. In relation to the development stage of the pest, the Capirel treatment window is relatively short, extending from ‘egg hatch’ to ‘larvae feeding on lateral roots’. Capirel should be applied at a rate of 12 sachets/ha of crop (equivalent to 3 billion nematodes). Capirel has a 12 week shelf-life when stored between 2-6oC.